Keep up with the latest in industry trends, hiring best practices and career advice.

U.S. employers expanded payrolls by 943,000 jobs in July 2021, according to the Bureau of Labor Statistics (BLS). Employers in Leisure and Hospitality continue to lead in hiring, followed by Local Government Education, and Professional and Business Services. 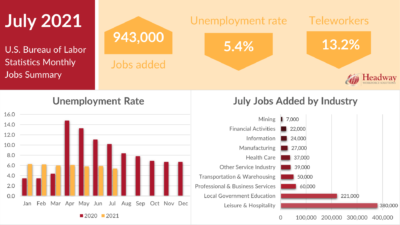 In addition to the Leisure and Hospitality industry, the following industries experienced growth last month:

The unemployment rate declined by 0.5 percent from June to 5.4 percent in July, and the number of unemployed persons fell by 782,000 to 8.7 million. The unemployment rate is down considerably from its high levels in April 2020 but remains well above the pre-coronavirus rate of 3.5 percent and 5.7 million unemployed in February 2020. Among the unemployed, the number of persons on temporary layoff fell by 572,000 to 1.2 million in July. The number of permanent job losses also declined in July by 257,000 to 2.9 million but is still 1.6 million higher than in February 2020.

Among the major worker groups, the unemployment rates are:

In July, 13.2 percent of employed persons teleworked because of the coronavirus pandemic, down 1.2 percent from June. This decrease reflects the lowering of restrictions and reopening of many workplaces in July. The average workweek in July remained unchanged at 34.8 hours.